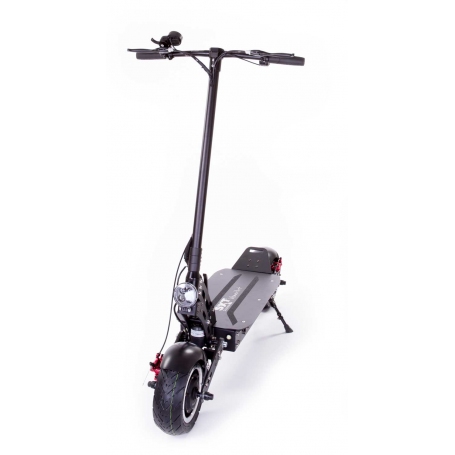 1 year warranty with the manufacturer

Fastest compact e-scooter in the world

A staggering 2 x 1,800 W max. motor power - i.e. a combined 3,600 W all-wheel drive, literally explode out of the two brushless hub motors and speak for themselves. The front motor can be switched on or off as required. In combination with 60V on-board voltage, these two motors catapult the beast to a max. speed of up to 80 km/h. Gradients of 15-20° (equivalent to over 30%) are child's play in full load mode. Talking about the possible range is out of the question with such an overpowered bike - it is about 50 km with only one engine and economical driving and drops to about 20-25 km when using both engines.

The brake system consists of hydraulic calipers mounted on 140 mm brake discs at the front and rear. The power supply of the vehicle takes over a 60V 23Ah Li Ion battery pack whose charging time in connection with the supplied 2 A charger is the charging time due to the large battery capacity 10-12 hours. To shorten this time there is the possibility to connect a second, optionally available charger, which halves the charging time accordingly.

LED lighting for a safe ride

The lighting of the SXT Ultimate PRO is also a big deal - two high-power LEDs shine in red at the back and a total of two high-power LEDs and a third LED front light illuminate the track at the front. To be overlooked is thus excluded with probability bordering on certainty. The large step area that covers the battery and control technology underneath measures 60 x 30 cm and is large enough to stand comfortably and safely at all times.

The tires are 90/65-6.5 CST pneumatic tires with inner tube and have an outside diameter of 11 inches, mounted on two-piece aluminum rims. By default, the SXT Ultimate Pro is equipped with street tires to ensure a good and smooth road holding. Optionally, the tires can also be replaced by lugged tires to make a good figure even off paved roads in off-road operation sets. Mud flaps are fitted as standard at the front and rear. The front and rear suspension is provided by a central shock absorber.

Foldable E-Scooter with a max. load of 120kg

The SXT Ultimate Pro can also be folded to save space, so that it can be stored in the boot of a car, for example. The brute engine power is controlled by a finger throttle on the right side of the handlebar. The maximum permissible load is 120 kg with a total weight of the electric scooter including battery of 41.64 kg.