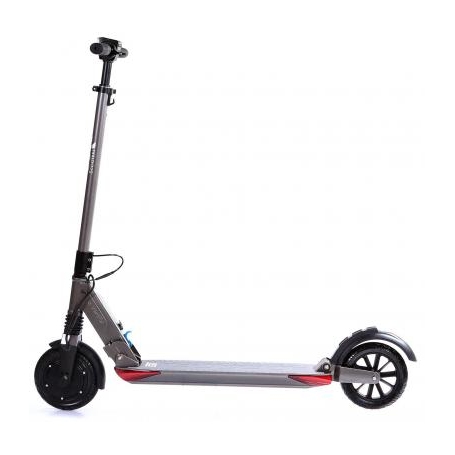 1 year warranty with the manufacturer

We present the consequent further development of the SXT Light series - the SXT Light GT. Based on many years of experience and customer feedback, this model has been further optimized in terms of power and performance.

Differences compared to the SXT Light Plus V model at a glance:

The optimization of the motor, in interaction with further developed control unit result in a higher torque, as well as a max. final speed of up to 40 km/h. Based on the higher torque at the drive axle, the climbing ability could be further improved.

The adjustment of the operating voltage to 48V in conjunction with the extension of the footboard, now allows a battery capacity of 504 Wh, which is sufficient for a range of up to 50 km. With the supplied 3A charger, the charging time is, with a completely empty battery so only about 4 hours. At the same time, the footprint is thus increased, which allows an even more comfortable stand even on longer routes.

The total vehicle weight including battery of 11.9 kg remains sensationally low, which makes the electric scooter an actual daily companion in all situations, which can be folded compactly at any time and taken anywhere.

Like its predecessor, the SXT Light GT is equipped with pressureless rubber tires, which in conjunction with the shock absorbers provide excellent road holding.

ATTENTION!!! The model SXT light GT is not allowed in the area of the Swiss road traffic law!